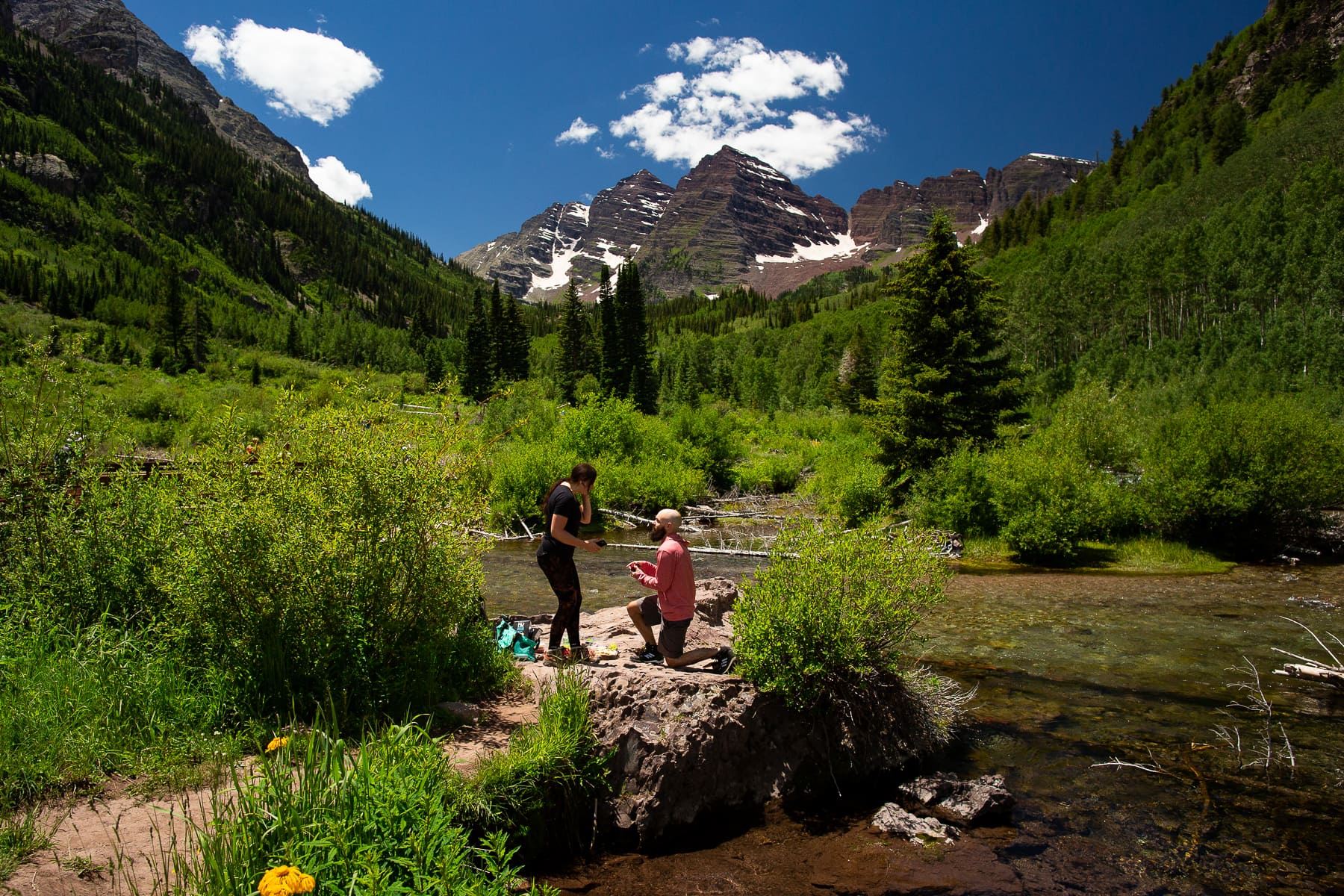 The first thing you need to know about Wes and Dani’s Maroon Bells Proposal is that it was awesome! And secondly, it almost didn’t happen because of a moose. These two met while practicing jiu jitsu – which is just about the coolest thing to do as a couple! Like any great proposal, it began with a bunch of lies. Wes told Dani that he’d always wanted to see the Maroon Bells. Okay, not much of a stretch there, because it is one of the most gorgeous places in our state. He planned to take her on a picnic there one afternoon. What she didn’t know was that he had a plan to propose! And that he and I had been in cahoots for weeks. Since Wes hadn’t been to the Maroon Bells before, I helped him choose a spot ahead of time. But then..

A secret plan with an unexpected guest

Our spot was a short hike away from the busiest area, at the lake. While still having a great view of the peaks, of course! We had a rain backup plan, a shuttle bus backup plan, and everything laid out. I got to the spot early, as planned. It was a BEAUTIFUL day. And then.. A huge bull moose came down to Maroon Lake. The rangers promptly shut down the trail that runs between Wes and me. The hope was that the moose would finish drinking and leave the area. But that was NOT what happened! The trail closure caused chaos with hikers returning from the wilderness. This confused the Moose more, and the trails were blocked for over 45 minutes before he finally left.. right after scaring the bleepers out of Wes and Dani as they finally made their way to me!

Of course, that wasn’t the most memorable thing to happen to Dani that day! After they reached the secret spot, they paused to take in that view. That was when he dropped to one knee. She was so cutely shocked, she dropped down to his level too! They were both emotional as she said yes and embraced. It was a photographer’s dream as they kept smooching and giggling together. That’s one of life’s magic moments!! How awesome it is to have it all this captured! None of these photos are staged, and that’s exactly what Wes wanted when he hired me. Just them in their natural habitat. Plus- don’t miss the amazing geode ring box that compliments the pear shaped diamond ring!

Yes, I shoot proposals! See more Proposals here, and check out my list of colorado locations to propose too!