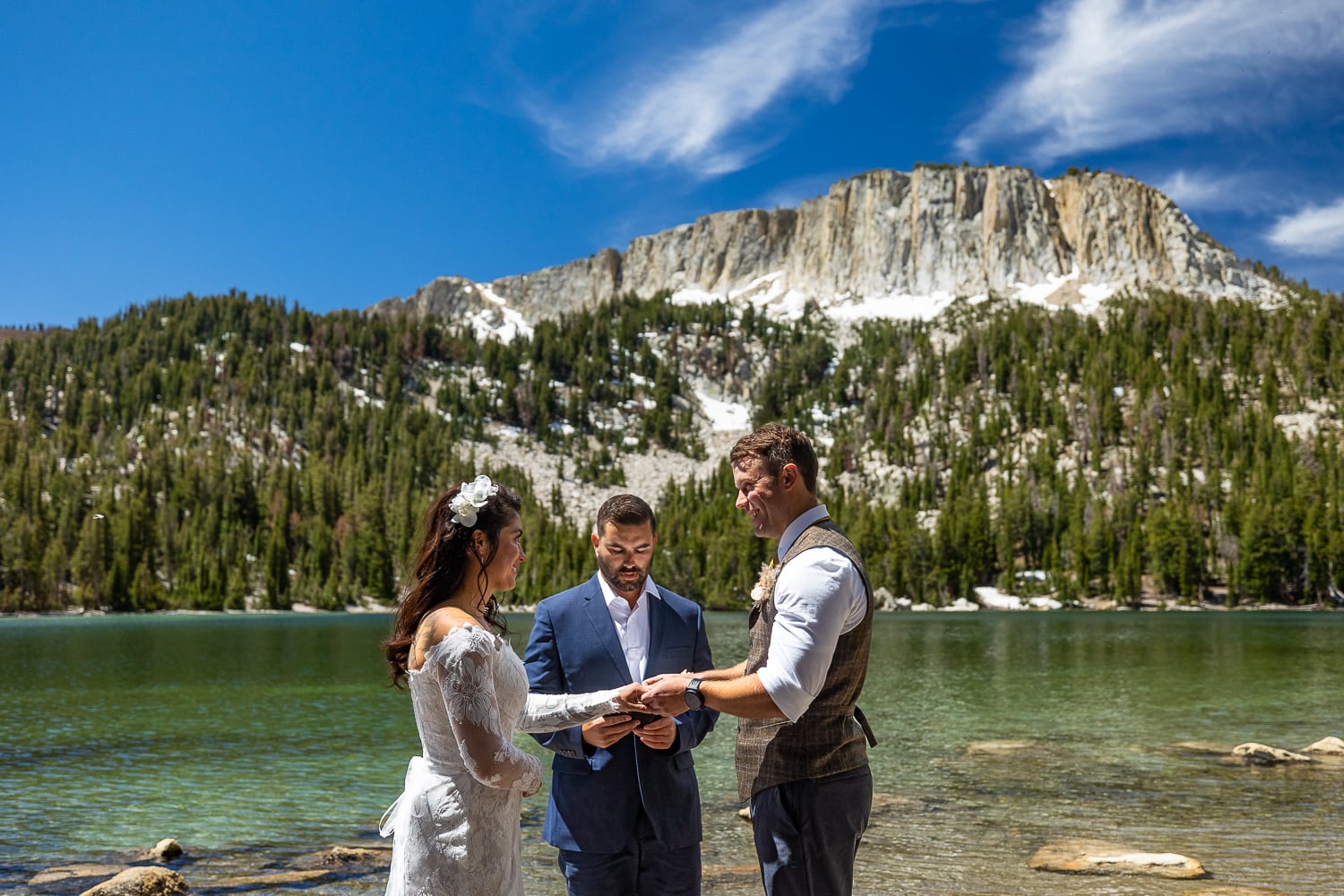 Shooting Sarah & Nick’s Mammoth Lakes elopement at Mcleod Lake was a dream for a colorful photographer like me. Everything about their day was personal and centered around their experience in nature. I especially loved the Just Eloped signs they hung from their backpacks. Watching them hike hand in hand together after the ceremony was a reminder of what it’s all about: having the best dang day, your way.

The color of first light was like fire creeping down the steep mountainside on this June morning. Surrounded by the crisp mountain air and 3 curious deer, these two said their vows privately at sunrise. This allowed them to be themselves and not feel watched during their most intimate moments. Since they spend so much time hiking and enjoying the outdoors, they chose to say their vows in their outdoor wear. I love it when couples keep it real!

Being a shy couple, Sarah and Nick knew they wanted to include some activities that made them feel grounded. After all, an elopement isn’t some big photoshoot! After the sun rose, Sarah made coffee on their backpacking stove. Sharing the hot mugs with the lake below them was such a peaceful moment. Then, Nick got out his guitar, and sang an acoustic ballad just for Sarah that had her tearing up! I have to admit it was one of the most romantic gestures I’ve ever seen at an elopement. I’ve been all over in June, and my trip to California for their Mammoth Lakes Elopement was a huge highlight for this reason!

A Mammoth Lakes Elopement with Dogs

Central to Sarah and Nick’s life is their 2 year old barrel of laughs, Finn. They warned me that he was a ham, but I was still not totally prepared for the ridiculous shenanigans of this dog. He’s obsessed with light reflections and chased them passionately. His hair coifs in such a way that it looks a bit like a toupe on the top of his head. And his “Pepe le Pew” tail was our constant companion on our adventures. This pup of honor was a chaotic and adorable addition. The photos of him are sure to be some of their favorites. It absolutely wouldn’t have been Sarah & Nick’s day without Finn at their Mammoth Lakes Elopement.

There is SO MUCH to see and do in this mountain town, that we had to explore a few of the highlights. We began the day at Witsanap lake, south of Mammoth. Then we headed to some nearby BLM land for the best view of the eastern Sierras and hot springs. We then met up at the trailhead for a short, half mile hike to their ceremony lake. After the ceremony, we ran up to Minaret Vista for this epic view of the mountain peaks that separate Mammoth from Yosemite and beyond. They later had dinner and toasts at Mammoth Brewing just down the road. Everything was simple, beautiful, and perfectly Nick and Sarah. My map of amazing locations in Mammoth is one of my most detailed and most popular. Get in touch if you’d like to see and plan your own Mammoth Lakes Elopement!

The hike to Mcleod lake is a pleasant half mile hike through the forest. But be mindful that the trial starts at about 9,000 feet elevation! I’m accustomed to some altitude and hike regularly, but this one still had my blood pumping for sure. (Well, that and I was carrying a ridiculous amount of gear. And backup gear. And backup backup gear.) The most important part, as we found out, was the split just yards from the trailhead. Some of the couple’s family took the wrong trail. They were headed towards Mammoth Pass, a very strenuous and tough hike! A friend of the couple was volun-told to run up the trail and locate them and bring them to the correct path. Because they were simply eloping, this hitch in the plan had no effect on how awesome their day was. We simply waited for everyone to reach the right place.

A few close family and friends lined the small clearing on the shore of the colorful waters of Mcleod Lake. Their cute ceremony included a ring exchange and a handfasting and was performed by Nick’s longtime friend and brother in law. The couple were grinning from ear to ear the entire time. Trust me when I say that your ceremony will be a highlight of your day and your entire life! In the name of adventure, I got stuck in the trunk of my car while removing my backpack and Nick had to fish me out. I looked like an upside down turtle, for goodness sake! I also had two colossal nosebleeds later in the day – just so you know, I’m a real human like you.