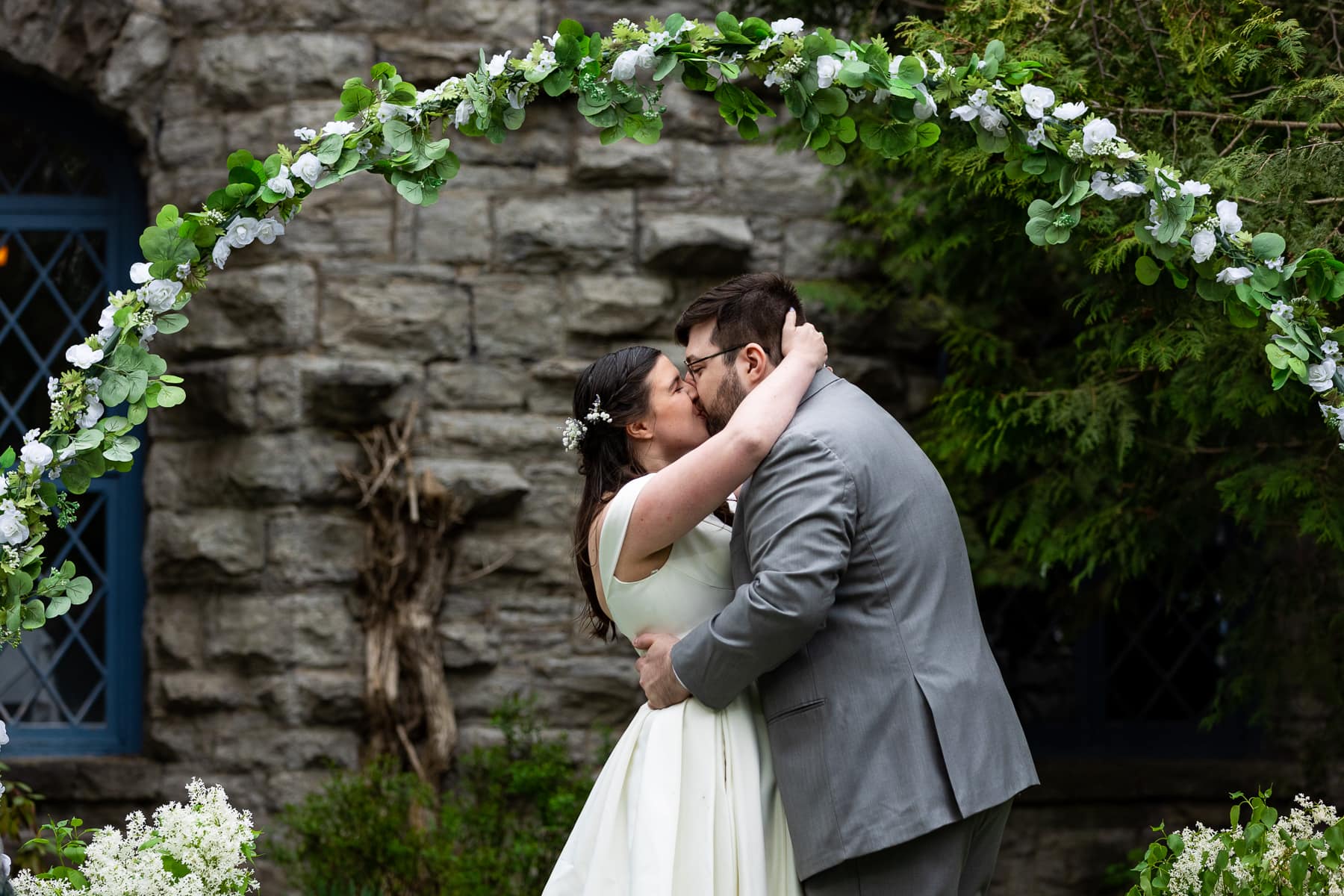 Have you ever wanted to see a magical set of Castle elopement photos? Look no further, because I’ve got a fresh bucketload! I’ve known Tara since we met at summer camp in Vermont in 2008. At that time, I lived in Massachusetts and she lived in Upstate NY. In 2012, I moved to upstate NY knowing I had a stronghold of summer camp friends there. Tara, her sister and I became close friends and would often walk to each other’s place when there were fresh cookies or hot bagel bites. I was immensely flattered when she followed in her sister’s footsteps and invited me to photograph her microwedding to her longtime partner, Aaron. But that’s ENOUGH about me!

Since an elopement has no one true definition, but is rather defined by the intention of the couple, I’m going to go ahead and call this an elopement. With only immediate family invited to the ceremony, it was also a microwedding. Or intimate wedding. Or whatever you want to call it! The tight guest list meant that the couple didn’t feel overly “watched” while reading their vows. With a first look built into their relaxed timeline, they were able to spend plenty of time alone before the socializing kicked in. Aaron’s mom made all the cupcakes, Tara’s mom made her bouquet, and the groom himself made his bride a flower & resin necklace. Everything was handmade and stayed in the family.

If you’ve ever wanted to get married at a castle, let me just say that the Beardslee is the best castle venue I’ve ever had the pleasure of shooting at. (And I’ve been to quite a few!) This castle is gorgeous and looks just out of a fairytale. It houses an excellent restaurant and the staff have already thought of everything, so you don’t have to. The blue windows add a pop of color against the grey stone. And the garden where Tara & Aaron had their ceremony was private and included views of the cobbled building. It was just SO easy to find great spots to shoot here. If you want a castle, but you want to stay in the USA, consider the Beardslee Castle. #notevensponsored

The Candid First Look and a.. cat?

Admittedly, the first look didn’t go as (I’d) planned. The couple saw each other from a distance as Aaron exited the castle in a flurry of “I’m overheating in this suit!” haste. (Which was warranted.) But as they drew closer together, nothing could change the excitement and joy on their faces, and to me, that’s what it’s all about anyway! They strolled through the grounds together and found a swing where Aaron graciously pushed his bride. There was even a flowering magnolia tree, so we had to get some pics under it. That’s when Aaron called out “There’s a cat!” and I literally burst into tears because I was overjoyed to see a cat. I said “NOW this is the perfect wedding!” (Because this was true.)

My favorite part of the day is in the details. Just before the ceremony, the groom’s sister found an honest to goodness four leaf clover in the garden. It was a beautiful sign that everything was about to go just right. Four leaf clovers were also a favorite motif of the bride’s grandmother, who was very missed that day. The clover was immediately added to Tara’s bouquet. The couple chose to light a (handmade) unity candle from long, medieval looking candlesticks that fit the vibe perfectly. As they read from their leather vow books, Aaron turned out a 3 foot long list of things he loved about Tara, much to her surprise. These personal touches made everyone tear up – several times! Then they had to have a candlestick duel right after the first kiss.. obviously..

Kind People are my Kind of People

Being the sweetest human beings ever, the couple each wrote kind things about me on the internet. As proof that their day went as well for them as it did for me, I’m going to share their testimonials here.

Aaron said, “Lucy is the most amazing, talented, goofy, inventive photographer you could ever imagine. Her work is phenomenal and she doesn’t let it get to her head. She’s both professional and fun. Every photo she takes is carefully thought out and fits a vision crafted around you. She made taking pictures fun for me (which is never is).”

Tara said, “I would say Lucy’s photos speak for themselves, except they don’t show you what an amazing, funny and easy to work with person Lucy is! Not only does she deliver world class photography, but she will make you feel amazing taking the photos (and then it shows in the pictures!). My now husband hates taking photos, but he specifically said the day after our wedding that he had fun (a word he’s never used about a photo) taking all our pictures. You should absolutely hire Lucy, you will be so thankful you did! She was a big part in making it the best day of my life, and now I have amazing photos to look back on for years to come to remember how perfect it was. Thank you, thank you, thank you!!”

And because these two did literally anything I asked, I got this pic of them kissing both my cheeks. It’s ridiculous and I love it.