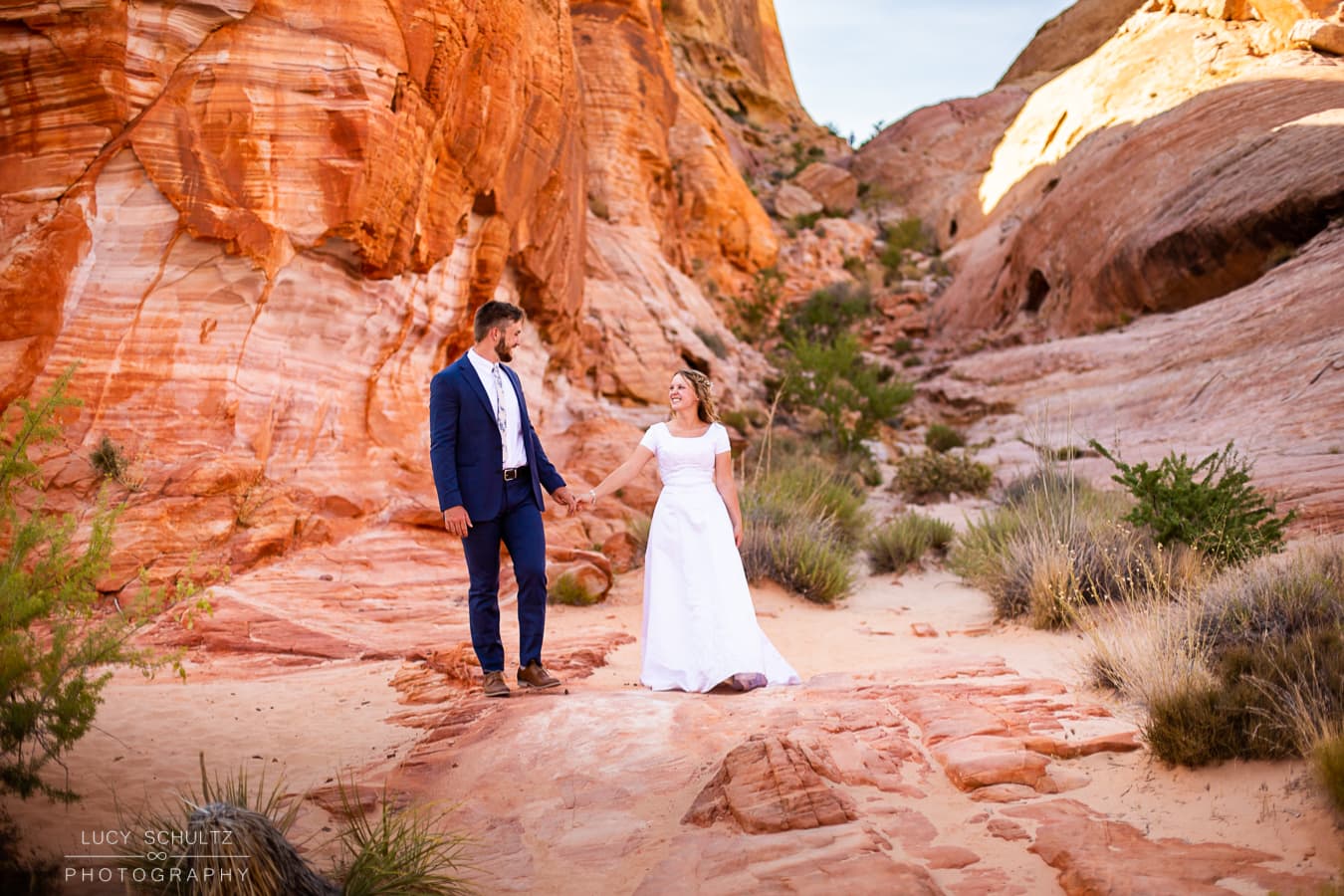 I’m obsessed with happy people and therefore, I’m obsessed with Chais and Spencer! After getting engaged in February, they braved so many rescheduled wedding plans, I’m not even going to list them all. This isn’t a downer story, though, because the end result were these incredibly gorgeous elopement photos in Valley of Fire. To be this gleeful in one of the hottest canyons on earth means they must REALLY like each other. Seriously, I don’t think I have a single photo of them where they’re not grinning. That’s what eloping is all about: having as much fun together as possible! It’s my goal to deliver photos that make people say “We had a blast AND these look like us!” From the moment we stepped out of our cars, we were all doubled over laughing together. I don’t even remember why! Well, I was probably making inappropriate jokes about Spencer’s butt. Because as you’re about to see, Becky, it is so.. round. There I go again!

These beauts went for an adventurous elopement hike in Valley of Fire during the heat of June. This made it a type 2 fun kind of day. Spencer was absolutely the MVP in his blue suit as we all were sweating uncontrollably. The red hues of the rock canyon walls and blue sky made a beautiful backdrop for their colorful desert elopement photos, and they shared a romantic first dance in the dry riverbed. On the hike down to the main attraction, the slot canyon, we observed purple and orange Tarantula hawk wasps. My trusty steed/packhorse (and entomologist husband) Steven told us all about how they attack tarantulas. We had an incredible time exploring the slot canyon, in which Spencer found a single Blueberry (wat?!). Their epic elopement photos in the slot canyon are some of my favorite of all the destination elopements I’ve been a part of.

On our hike out, to our astonishment we witnessed a tarantula hawk wasp dueling with a desert tarantula exactly as Steven had described – what are the chances!? Good thing Chais and Spencer are nature lovers and appreciated this once in a lifetime sight instead of running for the hills. Now you can enjoy their Valley Of Fire elopement through the colorful and creative photos below, with two tiny planets and more romance than you can shake a tarantula at! And if you’re interested in eloping at Valley of Fire, check out my guide with all the info and possibilities!