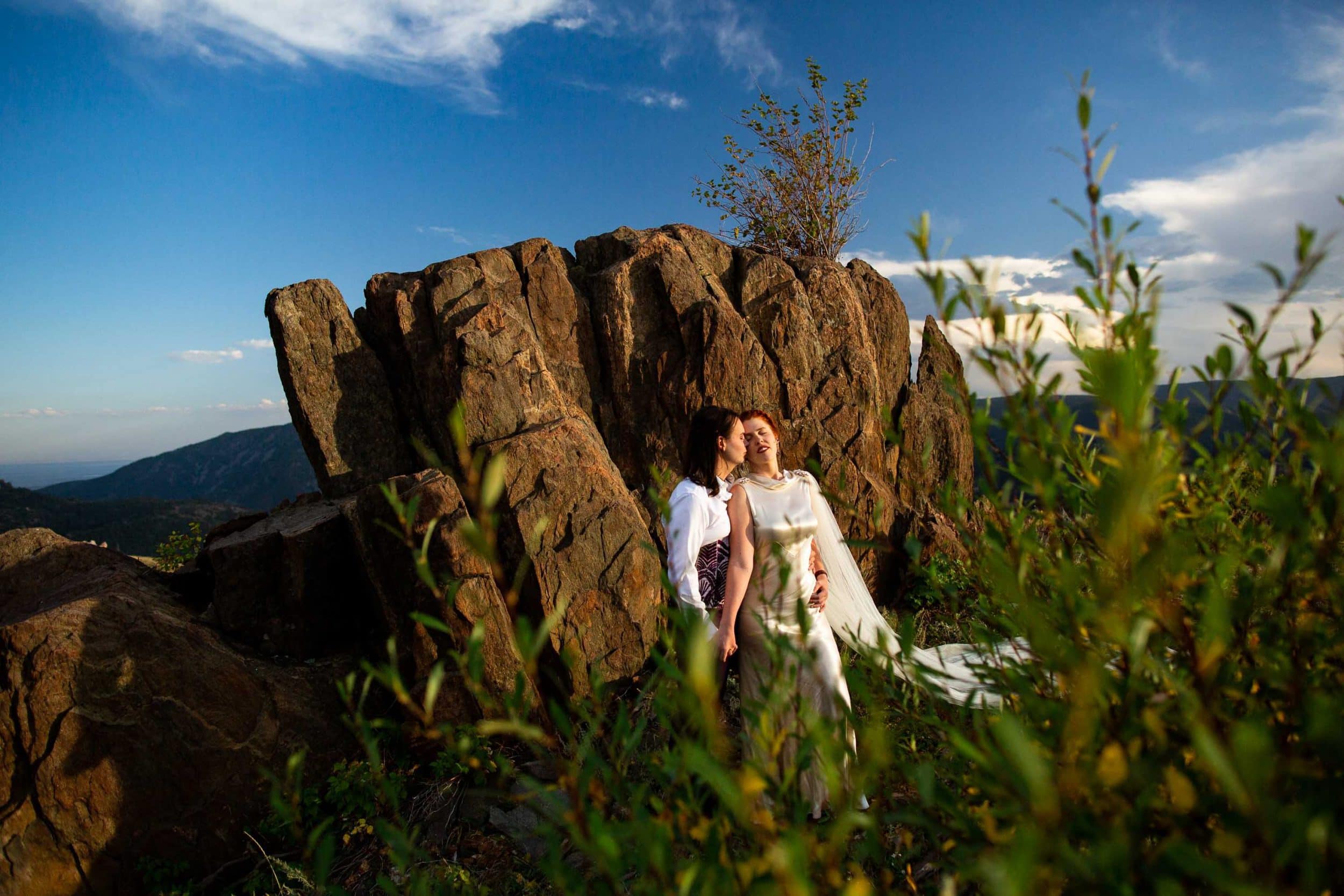 Get ready for a stunningly colorful two day elopement post! This poly pair planned their elopement to be above all else, authentically THEM. On a bright September Thursday they gathered their besties in a colorful hostel and had a pillow fight. Sweet tears were shared as they saw each other dressed for the first time.  Will kept his look a secret from Ruth, so he tapped her on the shoulder for the big reveal. It was an incredible moment in the beautiful garden atrium of Solarium. Then we headed up into the mountains outside of Fort Collins for their intimate elopement. On the way up the mountain road for their lgbt romantic portraits, they told me to just yell “STOP!!” when I saw a scene I wanted to shoot. I’m so glad they put their trust in me, as we shot with cliffs and peaks, red rocks and golden streaks of late afternoon light.

They picked out a circular meadow in between a grove of aspens for their intimate elopement ceremony. It was quiet and still and everyone came with their hearts wide open. One by one, their friends made speeches of encouragement, support, and love in the growing darkness. Everyone cried during the couple’s private vows, and when they were finished we realized it was pitch dark. All ten friends witnessed and signed the marriage license on each other’s backs lit by cell phone flashlights and the hoop lights that Ruth designed in a circle motif. Okay, enough with the words – check out their beautiful highlights of this unique elopement celebration!

A crazy idea with an even crazier stunt driver..

While driving up the mountain to this spot, I pitched the idea to them of kicking up dust from the dirt road behind them so that the sunset light would filter through the dust particles. I’m not sure I did a good job of explaining the shot I saw in my head. But, being the best couple ever, they obliged. Or should I say Carl obliged, as our daredevil chauffer, lighting assistant and bridesman Carl took their subaru for a wild ride. Up and down a 20 foot stretch of road behind them, repeatedly, at god-knows-how-many-mph with a lot of screeching and braking and luckily, lots of dust. It was also a surefire way to make the couple laugh, as every time Carl flew by they just roared with laughter at the ridiculousness of the whole situation. And yeah, the photos came out SO GOOD.

Did I mention I felt like *I* was winning while shooting this pair?! Because I totally won. Since we completed romantic portraits of them on the first day, the second day was all about moments, and there were plenty! Such sweet emotions were shared – keep scrolling to see what made me break down crying! Ruth became the third generation woman in her family to wear The wedding dress, a white gold silk gown with a cowl, open back, and zigzag front seam. Will stunned in a purple suit with a custom corset with an intricate pattern, winged eyeliner, and star wars cufflinks. I mean, he did rock killer pink heels at their engagement session– but no shoes on this day! Here is a collection of the best candid moments of their gender bending two day elopement celebration.

“Euphoria” is how Will described how he was feeling that night at the reception, while Ruth shared that she felt like she was “cheating at life” by having all her favorite people, things, and activities going on. If that’s not good planning, I don’t know what is! After their intimate elopement surrounded by their closest besties, they hosted a second ceremony and gathering to celebrate and dance with all their friends and family that weekend. This made for an epic montage of everything important to the two of them, namely JOY and more color than you can shake a stick at. Their processional began by motorized flower grandma; they got to dance with everyone they know and love; they got to shoot everyone with nerf darts (yes, actually!); and most of all they had so much time to spend together, authentically loving one another.

Day two was hitting me right in the feels, man. Witnessing such amazing, intimate moments of this family exchanging letters had me sobbing. I tried to hide it, but they broke the fourth wall and immediately adopted me without an application or interview, and held me until my tears turned to laughter.. GET IT TOGETHER, LUCY! Also here’s a photo I’ll show my physical therapist when I explain that my back hurts..