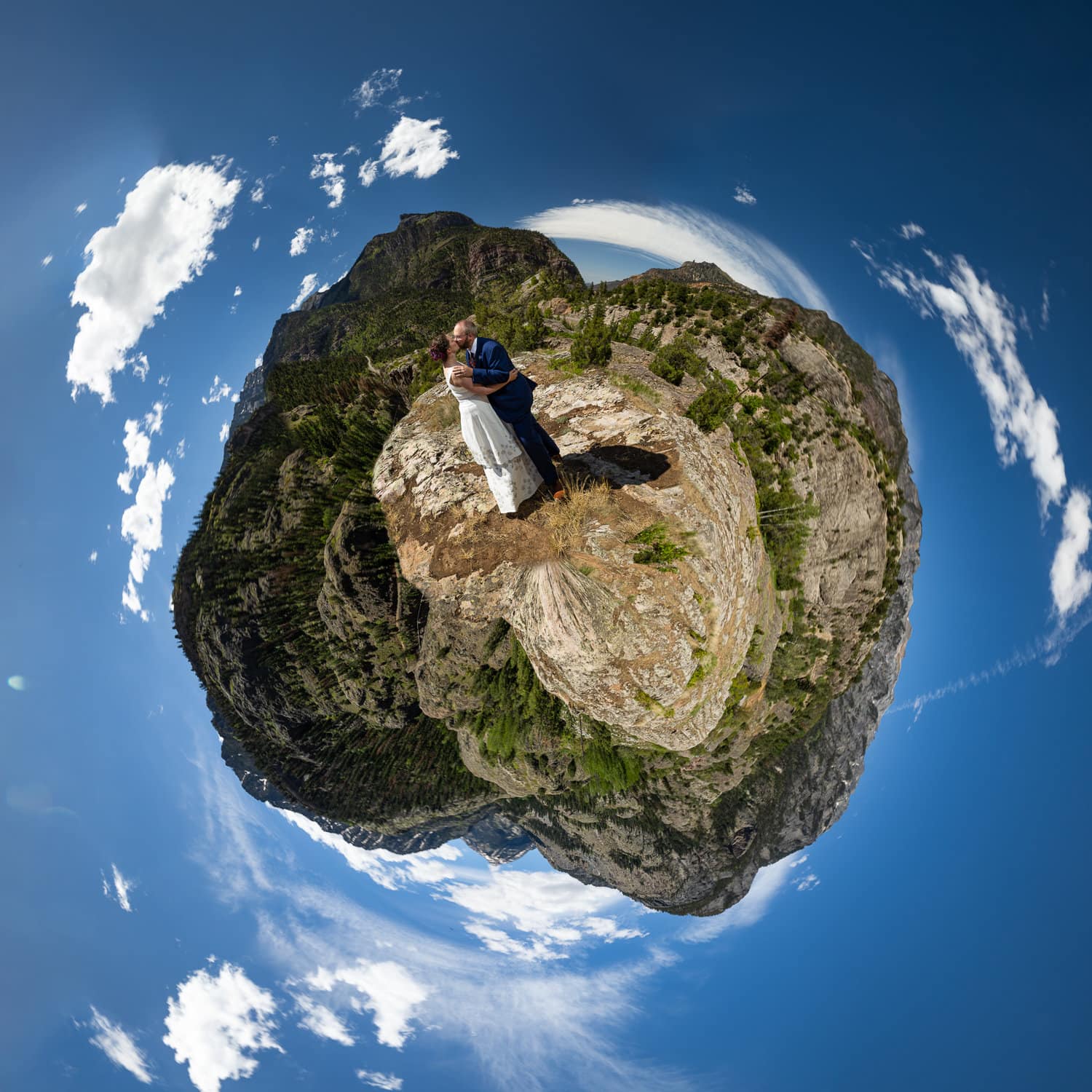 Buckle up for Stephanie and Cameron’s Summer Ouray elopement photos! If I could use just one word to describe these two it would be JOY. What a ride it has been with these two. I first met Stephanie in 2016 in Coastal Maine, where she was a bridesmaid at her friend Jodie’s wedding. I was shooting the wedding and we just hit it off! We even shared a dance at the reception. She told me that night that one day, she’d like to marry her personal lumberjack Cameron in Ouray, Colorado. Years went by and we both moved to Colorado. She got engaged and called me that same week! We set a date for fall of 2019. But it wasn’t meant to be, and they pushed back the date to May of 2020. Unfortunately.. that was not to be for obvious reasons.

The Journey to Ouray

They set a new date for June of 2022 for their Summer Ouray elopement. I couldn’t wait! It was finally time to celebrate. I was ready to drive my mobile home, known as The Mobile Command Center, to Ouray! Except then everything in my life hit the fan. Our trusty truck was not so trusty after we accidentally exploded the transmission in Death Valley on the way to Mammoth Lakes. Woops! We got it fixed, but by then we didn’t have enough time to drive to Ouray from Las Vegas. So I hopped on a plane to Denver and watched as I flew right over Ouray. Then 6 more hours in the car across the state of Colorado right back to Ouray- and after their elopement I did it all again in reverse order. It was a little nuts, but I didn’t mind.

Stephanie and Cameron had done many hikes in Ouray together including the Perimeter trail. However, they needed a place that was super accessible for their cluster of besties and parents to join them. It also had to have the big mountain views that Ouray is known for. One spot I knew of ticked all their boxes, and I’m calling it “the best 360 degree view in Colorado.” from now on. They don’t call this place “the Switzerland of America” for nothing. This ceremony location is surrounded by the Amphitheater and views of Mt. Abrams. In Summer, it is absolutely idyllic and just a 5 minute walk from where you park. Luckily, Stephanie and Cameron loved this spot as much as I did and chose it for their ceremony. Visit my Ouray Elopement guide for more amazing ceremony ideas!

The day of the Elopement

Yet more curveballs were thrown their way as their dear friend who was set to officiate came down with the dread virus covid just hours before their Elopement day. Another friend stepped in to read what the previous friend had written- and did his best to capture the druidic rituals and traditions they had chosen to include. The reception space was changed up last minute to the beautiful outdoor garden of Ouray Manor. Stephanie’s dress, of which every stitch was done by hand, needed some final touches sewn on by Jodie that very morning! But nothing could truly stand in their way. As soon as the first look nerves were out, we simply set out to have the best day. It was finally THEIR DAY! We hiked to a small meadow overlooking the town where the couple fed each other trail gorp before the ceremony.

This Summer Ouray Elopement was full of sweet moments of affection between parents and friends. So much of my photography is candid and focused on what people are feeling and doing without any prompting. Only about 10% of the day, if that, is considered “posed” or “portrait” photography. This allows people to be transported back to the moments they were in when they see their photos. (Who wants to remember “ok now turn your head slightly to the left… and smile!”) This elopement ceremony was full of joy and giggles as Cameron and Stephanie shared a few kisses before the end of the ceremony when it was “time”. Hip hip ouray! They drove off in their newly-decorated JUST MARRIED mobile.

After the Elopement Ceremony

After hugs and high fives and a toast with crumbl cookies, the couple headed off for a bit more alone time. We completed the short hike up to Cascade Falls. Part of this area overlaps with the Perimeter trail that felt extra sentimental to the couple. Then we noshed on pies, fruit salad and the best dang catering I’ve had in a mountain town. Stephanie and Cameron didn’t have many guests, but one in particular stuck out to me. The very person who had introduced the couple to each other had been a guest at MY wedding! What a small world! After dinner, there was dancing in the grass and merriment until the sun went down on this beautiful elopement day.

Congratulations C&S, may laughter and joy prevail in all your adventures, hikes, and shenanigans!! -Lucy

Ready to make your Ouray Elopement your own? Get in Touch!