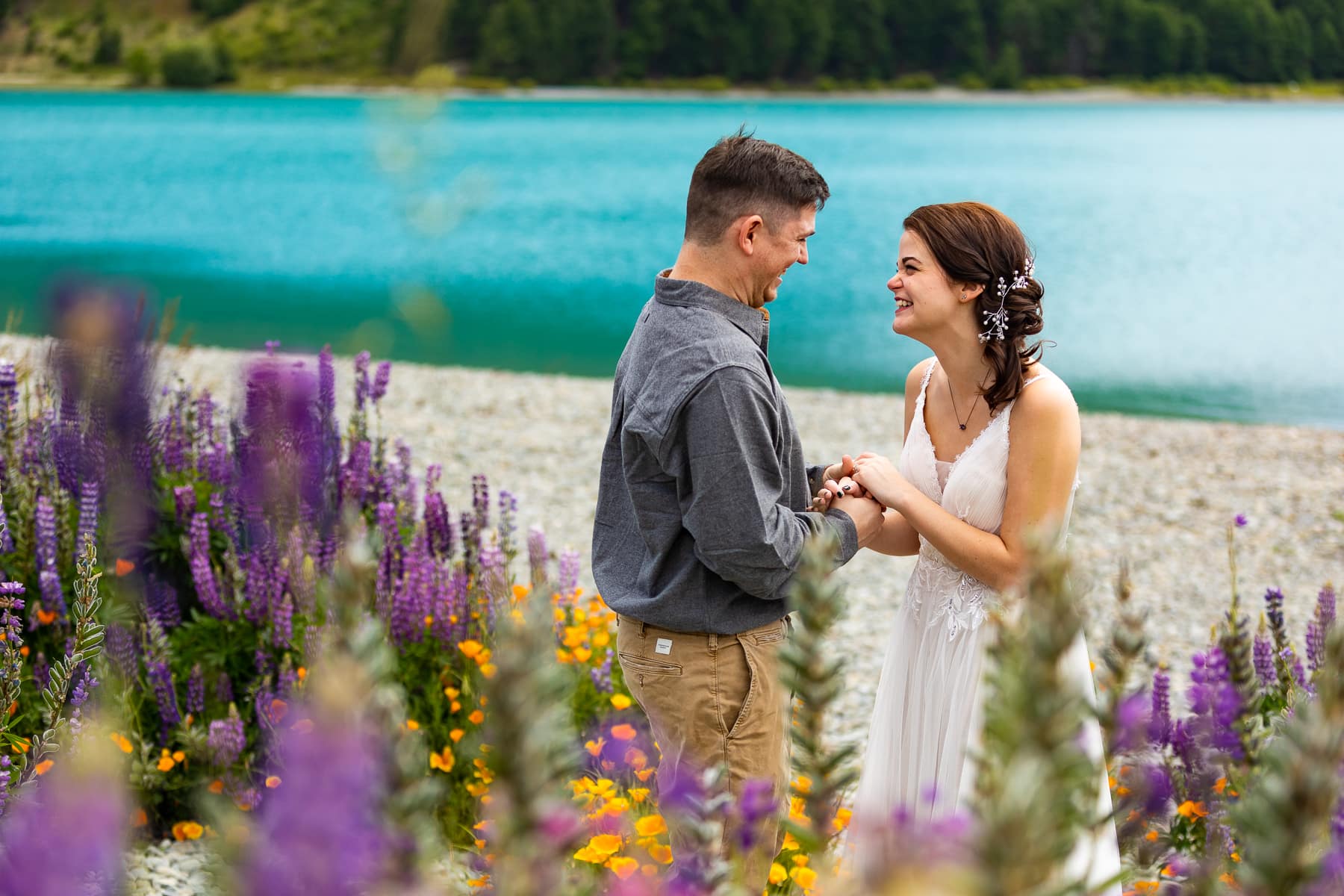 Renae & Paul’s epic, gorgeous and full of calamity New Zealand Adventure Elopement is finally here! And it’s nothing short of several non-denominational miracles that it really happened. So, let’s start at the beginning. Renae and Paul inquired with me and said they wanted “mountains.” We chatted about Utah and Colorado for a little bit, but nothing was lighting them up. Then Renae said, “What do you think about New Zealand?” and of course I started salivating immediately. I held it together enough to tell them why it’s my favorite country on earth. They were IN! We planned their international adventure elopement in New Zealand in just 5 months. I went to New Zealand a few weeks early, so I could soak in the beauty of North Island before meeting up with them on South Island. And that’s where my husband accidentally left his passport. *dead*

Upon arriving on South Island, without the passport, I opened my luggage to find that more than half of my batteries had been confiscated by the airline. Friends of mine in Christchurch offered a lifeline – they could buy some & drive them to me in Queenstown! But before that could happen, they were homebound with a positive covid test. I felt like a garbage human while panic-buying replacements at the only camera store within 200km. One specialty battery was unavailable on the whole island; generously a local photographer lent me a replacement. One thing about New Zealand that you can’t see in photos is how giving, helpful and kind the people are. Shout out to Andrew at Clear Skies Photography for saving my hide (and then inviting us to dinner and giving me a calendar?? We were completely out-niced!)

Ready for the Elopement

My crisises were averted and I was now ready for my dream job to begin! But unfortunately, when applying for their travel visa, Renae and Paul got swindled by a third party website. Without their approved visa, our heroes were denied boarding of their flight. It was time to sit down and cry for a while, so we all busied ourselves doing just that. Another miracle occurred when an American Airlines agent gifted them new flights for the same rate as their old ones. She might have been fired for it, so wherever you are, WE LOVE YOU! So a few days later, they arrived! But without their bags. *ominous chord* YUP. These intrepid, resilient people forged ahead with their elopement against literally ALL of the odds. In my husbands’ words, “We are going to get these people married in New Zealand if we DIE TRYING.”

The morning of the big day arrived. They got ready in their campervan on the shore of Lake Tekapo; only one of the most beautiful turquoise lakes in the world. At one point it seemed like Paul’s pants were in their missing checked luggage, so I immediately offered him my husband’s pants. Talk about giving the shirt off your back.. But, that was not needed as they found Paul’s pants, the dress, and the rings were in their carry on. They shared a sweet as frick first look, surrounded by blue and pink flowers. And yes, we got them so many mountains in the background. This was just the start of their incredible 2 day New Zealand adventure elopement!

They walked together along the shoreline of Lake Tekapo to find the perfect elopement ceremony spot in the Lupines. While this is a popular area in December when the flowers are at their peak, we found a place where they could be alone. The intimacy of their elopement ceremony was very special to them. You’ll see them each wiping away a few tears as they declared their love for each other and exchanged rings. Immediately after, they were absolutely giddy with joy and let’s face it, relief. They hugged, clasped hands, and then threw some hand signals to the sky in triumph! WE DID IT!!

We lunched on venison pies at the Edmund Hilary nature center before beginning the Hooker Lake Track. This is my favorite hike in the world, and the fact that it was pouring rain didn’t stop us. The umbrellas helped, and then Renae bunched her dress up under her sweater like a Pillsbury dough boy and hilarity ensued. They created a secret handshake in the rain. Playing a song on my phone, they held each other close for a romantic first dance in front of the ice-berg filled glacial lake. And then they absolutely just goofed off! Putting their fingers in each other’s noses, climbing up rock piles, and Renae picked up Paul like it was nothing. The fog and rain lifted and we got to watch several ice falls on Mt. Seftons’ glacial shoulders. This is what a New Zealand hiking elopement is made of! IT. WAS. EPIC.

Elopement under the Stars

We returned to Lake Tekapo after dinner for some stargazing, which the region is famous for. The forecast called for overcast skies all night, and I warned the newlyweds that we may not see ANY stars from Lake Tekapo. But we got lucky AGAIN and the stars were visible! Looking back at the images I captured, there are even a bunch of tiny meteors. Those are not planes! The best news of all was word that their bags had been found and they could retrieve them the next day!

But the fun didn’t end there! Anyone who has dreamed of a Milford Sound Elopement is about to have their mind blown. Renae and Paul joined me for a second day of New Zealand adventure elopement photography, seeing the best sights in New Zealand. We took a boat cruise on Milford Sound, and now that they had their luggage, Paul was wearing his fancy bow tie & suspenders. We saw New Zealand Fur Seals and dolphins from the boat, as well as countless waterfalls and jaw dropping fjords. At the end of the cruise, I told them it “wasn’t optional” to get on the front of the boat as we neared Stirling Falls. They held onto each other tightly as they got pummeled by this 495′ tall waterfall. The photos came out so good, I am not sorry.

These two people are so freaking special, you guys. They are so fun to be around, you’ll miss them as soon as they’re gone. They deserve the very best that married life has to offer. Because we became instant besties, it wasn’t too awkward when I felt up Paul. Let me explain. The wind was blowing quite hard on the boat and I thought it was making his shirt billow. I went to push the air out, only to find it wasn’t air, but pure muscle. I am facepalming again just thinking about it. Later, the wind took Renae’s dress so aggressively that I had to make a .gif of her trying to smooth it out.

It was then time to apply bugspray – LIBERALLY. If you’ve been to Milford sound, you know. The sand flies are intense and will have you wishing they were just mosquitoes. No Milford Sound adventure elopement would be complete without a LOT of bugspray. Now protected, we ventured onto the tidal flat. The couple read a book of messages of congratulations and well wishes from their loved ones, while I promptly got myself completely wet and muddy by falling into the ocean. My wet socks were worth it for these emotional gems.

Finally, we made a few stops along the Milford Road. More waterfalls, mountains, dense green mossy forest and fields of lupines welcomed us again and again. A mischievous Kea, an endemic alpine Parrot, even took a bite of Renae’s dress. After an icy river crossing almost swept us away, Renae got SASSY. She playfully threw petals over everyone – me, Paul, and, well that was all of us. And Paul definitely did NOT fall asleep on the way back. Nope.

And yes, we got my husband’s passport back.. which really just means we’re ready to go back!

Ready for your New Zealand Adventure Elopement with me?

Behind the scenes! Rain and a few weeds can’t stop me!