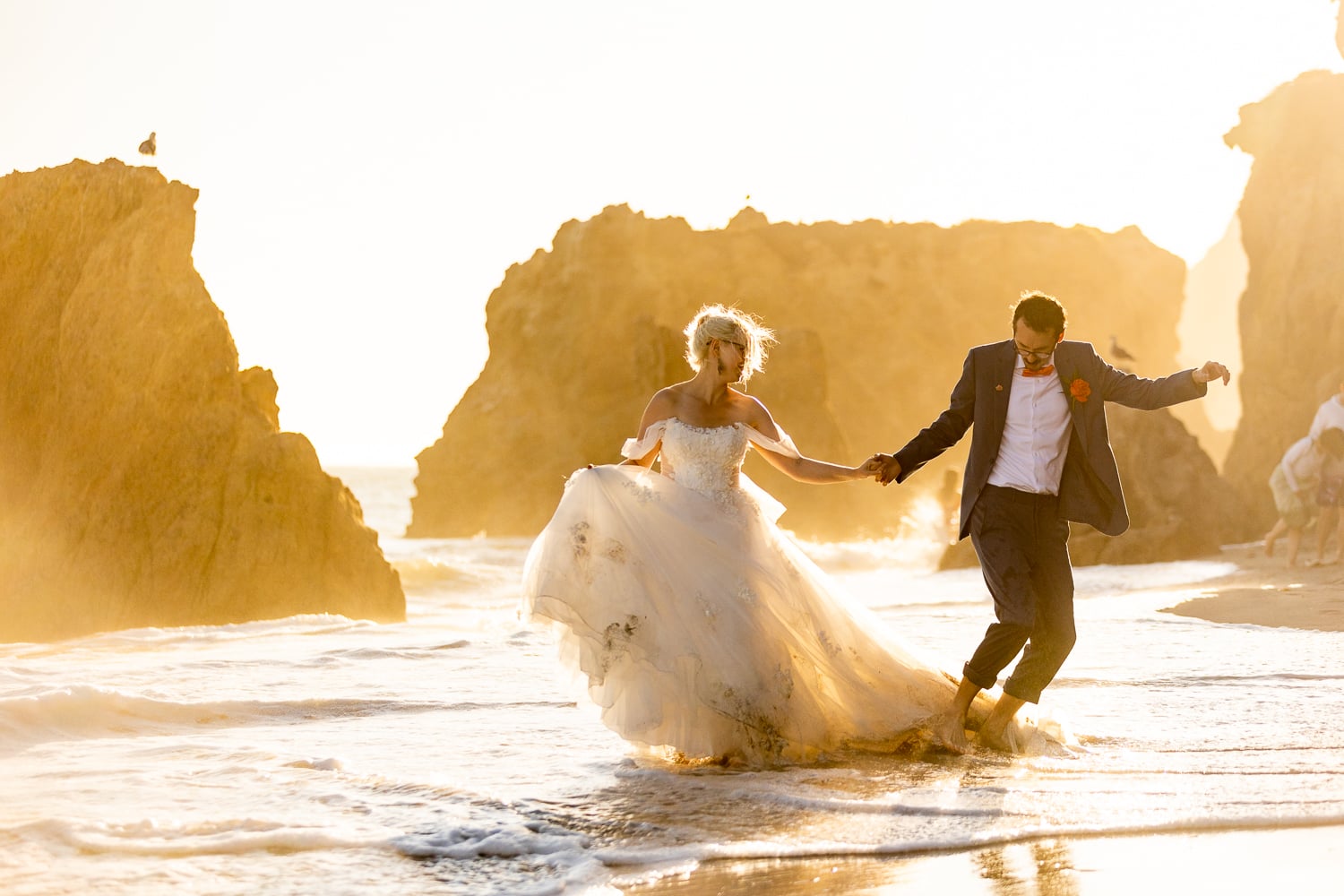 This one is a beauty! Hannah & Dave’s Malibu California beach elopement was one for the books. Hannah and I met over ten years ago in Vermont, so it was my pleasure to travel to California to photographer her, this time as a bride! And her husband Dave is the yin to my husband’s yang – it was hard to separate them after just 1 day together. We all got along so well, they didn’t mind my outrageous Australian accent which comes out every time I’m near a beach. 10/10, we loved photographing Hannah and Dave!

Anyone who says you can’t wear a ballgown on the beach is both wrong and missing out. Hannah’s dress was so perfectly her, with dramatic floofy layers. The romantic off the shoulders top was completed with long tulle flyers that tied up in the back. With her ice-blonde hair and tropical bouquet, she created her own style. I think we should name it Icelandic tropical beach magic glam. And yes – the dress got totally bogged down with sand, seaweed and bugs. Well that just added to the fun, and now her gown tells the story of her Malibu California beach elopement.

Colorful elopement groom at the beach in Malibu

Dave’s vibrant personality also showed up in his bright blue suit and yellow bouttoniere. He was swept away by their adorable first look. He put his hand over his heart as his voice caught. Not long after leaving the hotel courtyard, his flower disintegrated. No worries! I bit off a flower from Hannah’s bouquet and pinned it onto his lapel with some pins from my emergency kit. Biting off a flower was a first for me, but I’d do it again in a heartbeat. Check out my silly behind the scenes moment!

What to do at a Malibu beach elopement

These two already loved the beach, and you can tell they had so much fun! There’s a magic feeling that comes with being just-married and in one of your favorite places. They played in the waves and immediately got swamped with a few big waves. The tide was coming in and the sun was setting. They wrote their new last name together in the sand and screamed as it got washed away. They ran down the beach, dodged the waves and ate a personal pizza right out of the box.

California Elopements aren’t about the photos

It isn’t all about the pretty pictures! You can really get a sense of how much fun they had on their carefree day. Some of my favorite images are Dave’s reactions every time a wave crashes into him. He was jumping around like the sea was lava, despite the hot afternoon temps. They mean mugged the camera over their slices of beach pizza. (Beazza?) We experienced every color of sunset. And right as the sun dipped below the horizon, they spent a few minutes in a tight hug. Mmm, those are the best feelings! Congratulations Hannah & Dave!

Thus Hannah joins a long line of amazing women that I orginally met at summer camp. And they all ended up hiring me to photograph their microweddings! Tara, Megan, Sara, Leah, Rachel’s sister Mariel and next year Emma joins the ranks in Sequoia National Park!

Thinking about eloping on the beach?