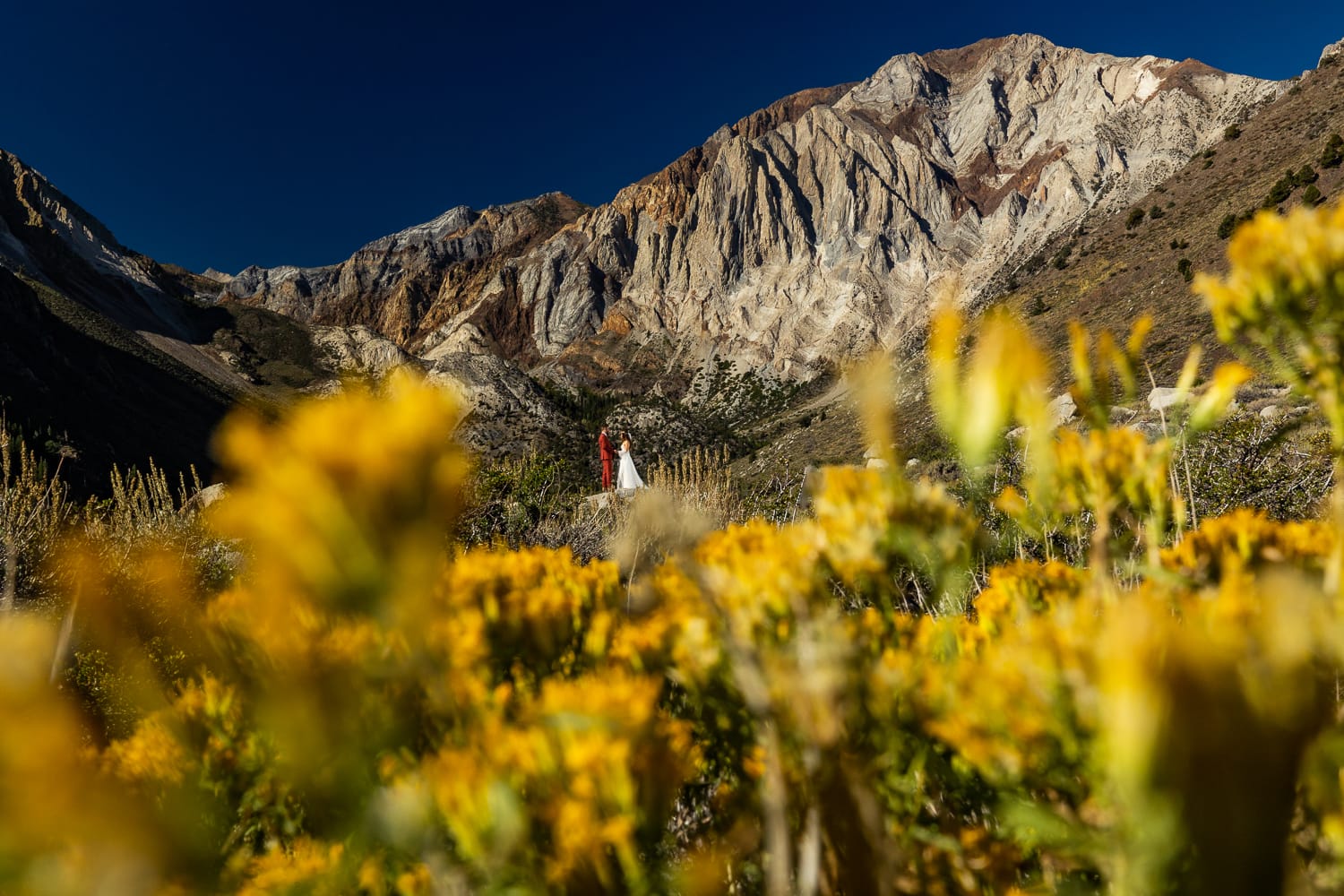 The time has finally come to share this whopper collection of epic destination elopement photos from Tee & Danny’s best day ever in September. This adventurous couple came all the way from the UK to elope in Mammoth Lakes, California. They knew they wanted to get married here because they had visited it once before on a road trip. Their idea of “what if we eloped just the two of us and had the most fun possible..” soon became a reality.

Soapbox moment here! When you choose to elope, you are selling yourselves short if you opt for just a few hours or a half day celebration. LIFE IS AWESOME and there is so much to do and see and experience and explore! I hope that these epic destination elopement photos give you the inspiration to grab your elopement by the horns. All together we visited 9 locations on Tee and Danny’s elopement day. But it wasn’t one long photoshoot – the couple planned activities (and meals) that they would have fun doing and eating. My job was just to document it!

We started getting ready before dawn at Tamarack Lodge, which is right on the shore of Twin Lakes. They exchanged thoughtful gifts – for him, a signed print by his favorite American pen &ink artist. And for her, a first edition Muir book on Yosemite. As the first light crept down the mountain, the couple shared their first look. Danny was overcome with emotion watching Tee twirl in her boho style wedding dress and cowboy boots. And for good reason – she’s a total babe! Danny wore a burnt sienna suit and cowboy-style bolo tie, making him quite the dreamboat as well! They were both absolutely brimming with excitement for this day that they had dreamed of. And this was a place so special to them and their love story.

California, unlike Colorado, is not a self-solemnizing state. Meaning, you legally must have an officiant when you elope in California. Luckily for you, and for them, I’m ordained! It was my highest honor to officiate the elopement for Tee & Danny on a giant rock they chose as their ceremony site. They were both soon wiping away each other’s tears as they shared their romantic and silly vows. Tee’s vows included a promise to ‘put out your hair when it catches on fire.’ to which Danny replied, ‘it was ONE TIME!!’ They had me in stitches! Meanwhile, I was laying in the yellow flowering rabbitbrush to capture the majestic and epic elopement location.

Eloping means rolling with the punches

After marrying and reading letters from their family and friends across the pond, it was time for a picnic! We headed to the bakery to pick up the lunch & cake.. only to find it closed due to the bakers unexpected medical emergency. The cake was baked and paid for the day before, so we just had to find a way in. Some delivery men were able to alert the bakery’s accountant, who willingly boxed up the cake for us. Phew! But, we didn’t have any food other than the cake. So, decked out in all their wedding finery, the newlyweds went to the most romantic place imaginable: the grocery store.

Elopement Picnic in a California Meadow

I helped Tee & Danny find the perfect picnic lunch location: a secluded meadow surrounded by mountains. They popped champagne, kicked off their shoes together and had the most picturesque picnic. I tried a British accent and they tried to talk like Americans and the resulting hilarity had us all doubled over. When it came time to taste their hard earned cake, it was decided that it wouldn’t make sense to dirty a plate. Armed with just forks, they tucked in and fed each other. Their laughter and ridiculousness made these some of my favorite photos of the day.

We soon headed to Minaret Vista to get those big epic destination elopement photos that everyone dreams of. These colorful photos look straight out of a magazine. If you are considering eloping in California, do check out my complete guide on where & how to elope in Mammoth Lakes. Minaret Vista is just one of those unforgettable views that is so easy to access! Another epic highlight of our day was stopping at a huge waterfall. With a bit of effort, we hiked to the edge where it tumbled onto the rocks below. Standing in the middle of the falls like that was a once in a lifetime experience! We also rented a canoe on Lake Mary for some ultra romantic Canoe Elopement Photos. Of course, no adventure elopement is complete without a little playful splashy splashy, am I right?

One of the best reasons for an all day elopement is leaving room for spontaneity. (Just spelling Spontaneity correctly is a win for me.) I made a custom trail mix for the couple using their favorite cereals. Soon they started throwing the pieces into each others mouths. But, honestly they were just awful at it! Cashews and lucky charms were flying everywhere! Danny hilariously quipped, “There are bout to be some right fat squirrels roun’ hee!” because of all the dropped bits. However, we picked up all the dropped food so as not to leave a trace. And, eventually some made it into their mouths.

Then things really hotted up as we adventured over to the natural hot springs just east of Mammoth Lakes. First it was time for take away steak dinner in the middle of nowhere as the sun set. Tee is so organized, she brought an entire table complete with a centerpiece! The result was a gorgeous dinner spread and a matching candy pink sky. They helped each other change behind a blanket (much laughter) and then had a quick make-out in the hot spring. It was quick because the world’s largest pack of mosquitos descended on us and we had to make a quick exit! As quick an exit as you can make with an entire dinner table, chairs, centerpiece and all..

Perhaps the best part, now. And if you’re reading this and thinking, how could any of THAT be topped? Well, hold on to your butts. I had stopped into the fire station the day before to speak with a firefighter about the fire restrictions in place, which were quite reasonable! We just had to reserve a campsite and keep the fire to a ring. This would make the couple’s dream of having their first dance by firelight come true! We played their country song on a phone speaker and lit the flames and let the magic happen. Congratulations Tee & Danny, may every anniversary bring you as much joy in this day!

I’m a nomadic and colorful elopement photographer with an obsession for mountains, hiking, and my cats. My photography style emphasizes the epic landscape of your dreams and the authentic moments that make you two.. well, you two! I love my job and my nature-loving clients. Mammoth Lakes is one of the most popular places that I travel to. Maybe I’ll see you there!