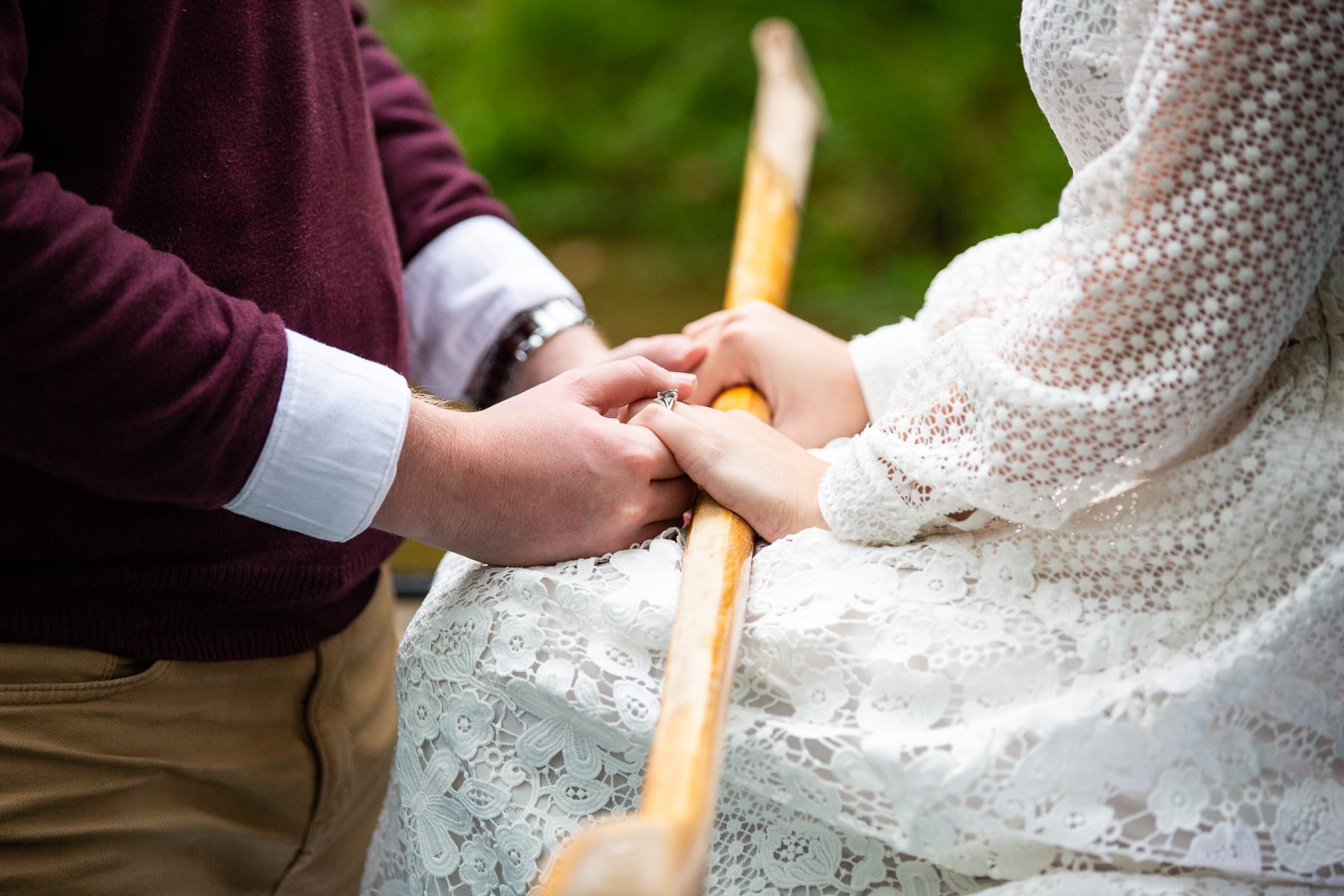 Get ready to be totally inspired by these two cuties’ canoe elopement photos! If you’re anything like me, the idea of eloping in a canoe while paddling a lake is beyond romantic. Dear reader, let me first say there is nothing romantic about loading said canoe onto your Camry and having it almost fall off on the highway. So, let’s move past that, as these two did.. multiple times. Hey, it’s ok – after 6 hours together we definitely knew how to tie it down properly!

What should we do during our elopement?

Like every elopement, we had many choices of what to do during their day. When they asked me for some suggestions and locations, I sat down and wrote a huge, overwhelmingly helpful email. And then I waited a day to let my brain fully churn up all the weirdness in there before sending the message. Then in the middle of the night, I woke up and wrote down ‘Canoe’. And then I realized that I’d driven by a gorgeous lake in 2013 that I had always wanted to shoot at. But the shore of the lake was really too narrow for a couple to stand… so I added a note to the bottom of my email. “If you really want to make my day, consider a canoe.. on this remote lake.. 2 hours drive away.”

And they went for it.

For more, check out the guide I wrote about what to do during your elopement!

Photos in the Canoe

After the ordeal of lugging the canoe, and dodging the forecasted rain, we were ecstatic to arrive at the pond. This feeling of peace and elation settled over us as we brought it down to the shore. They launched it and I’m not kidding, the sun came out and shone on all the fall colors and the couple. From then on it was time to PLAY. With the bride in the front and the groom paddling behind her, it was a magical scene. Then a splash fight broke out. I adore photographing elopement couples who aren’t afraid to be themselves and have as much fun as possible. You can’t help but grin as wide as they are when looking at these canoe elopement photos.

Not all their elopement photos went as planned..

After having the time of their lives in the canoe, and smooching all around the lake, a storm was coming and they headed back to shore. The bride had these fun mugs to share champagne in. But then.. we couldn’t open the champagne! The planned champagne pop was to be a key photo for them. And what we got instead was photos of Michael trying his hardest to pop the bottle. It started to rain, harder and harder as he tried to pry the top off. We were all soon in stitches as they got completely soaked but still couldn’t get it open. Oh well. Honestly, they will probably remember how silly this moment was more than if the top had popped traditionally.

The rain really started in earnest, so we grabbed a clear bubble umbrella to play in. One bonus of having just one umbrella is that they had to stand reeeeally close together to share its coverage 🙂 It was a romantic cuddle in the rainy forest. Their mugs soon filled up with rainwater, so they cheers’d with those instead. These two certainly knew how to make lemonade.. out of rainwater! They had the idea to play with some Acro yoga poses – an activity they do together regularly. We laid down a towel so that his back wouldn’t get too muddy and off she went! I love how she looks like she’s flying, barefoot and carefree. But.. the towel didn’t cover all of Michael, and when he stood up he had a little mud print on the back of his head. Hehehehe, we have no regrets – that’s what eloping is all about!

I will get dirty

My motto is, ‘You will look epic. We will have fun. And I will get dirty.’ This is as much a tagline as it is a guarantee. Staying true to this, I got quite soaked and muddy for this afternoon, even though I wasn’t trying! I waded into the lake and needed to get low to the water to capture the sparkle of the sunshine. I squatted.. a bit too low… and yeah, my booty was soaked for the whole rest of the day. Mud oozed between my toes in the shallows. And then I found dirt and pine needles all in my clothes and hair for the next 6 hours. Now THAT is what I call a good shoot!

Want to elope in a Canoe? Get in touch with me!