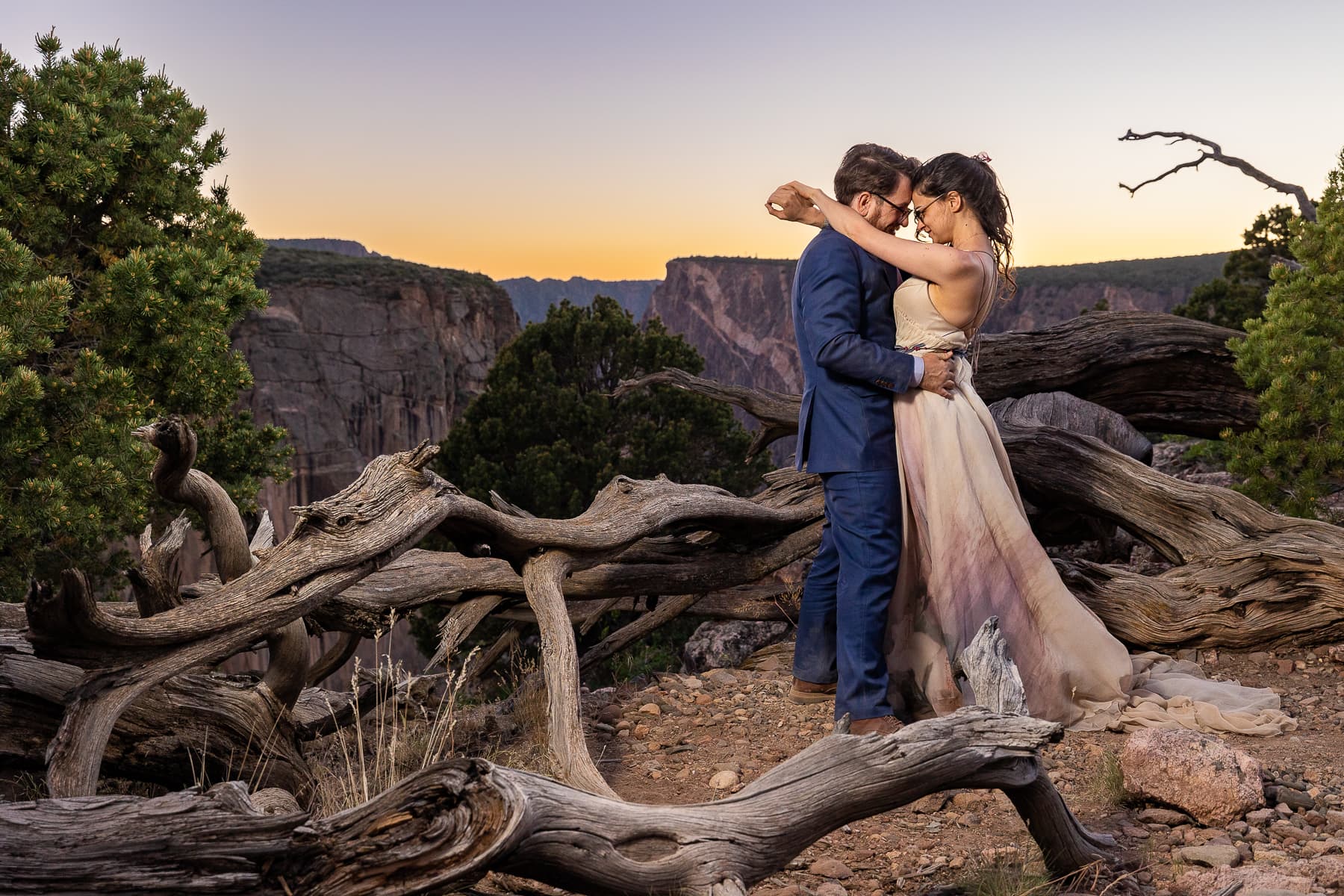 This collection of camping elopement photos has everything you could ever want! Kacie and Pete planned to hike to Exclamation Point in Black Canyon of the Gunnison National Park to elope. Exclamation point the real name of a jaw-dropping viewpoint on the North Rim of this steep canyon. Kacie wore a unique dress with watercolor flowers and Pete wore a bangin’ blue suit and pastel tie. Because they had no guests, they could truly do WHATEVER THEY WANTED. And what they wanted was to read their vows as the swallows ripped through the air next to them. They wanted to hike and stargaze and kick up the dust in the afternoon light. And right after their First Kiss, Pete swooped in and spun Kacie around just for the fun of it.

Camping Elopement at a National Park

Black Canyon of the Gunnison, or as I like to call it, Black Canny of the Gunny, has long been one of my favorite National Parks. Kacie and Pete were the ones to make all my dreams come true in this amazing location. Their love of the outdoors was brought into everything they did. By camping inside the national park, they knew their wedding night experience would be exactly the way they wanted it. They got ready for their elopement in their tent, stored their food in the bear box and wore hiking boots. There was no fuss.

Dirty Jokes At The Rim

Now, my ideal client can be anyone who wants to have a good time. But you get extra points if you can sling dirty jokes with me. As we began the day, Kacie turned to me and warned me that their tent had a nickname. You see, the tent has a large attached vestibule. So of course they named it “The Foreskin”. 5 minutes later, when I was photographing Pete’s portrait on the edge of the canyon, I said “I’m not going to make a rim job joke.” and Pete shot back, “Seeing as you’re the one working, I’d say it’s you who has the Rim Job.” Any semblance of professional filter was ripped from me as I doubled over laughing, and it was downhill from there. Yesssss.

Jokes aside, I take my job as a professional third wheel very seriously. I’m also a tour guide, and since these two aren’t from Colorado, I sent them pdfs on pdfs of my favorite places to eat, hikes, and must-sees. We agreed to meet up the day before their elopement for an adventure to my favorite secret waterfall, since it isn’t on any maps. These photos captured the two hikers in their natural habitat. Even though it was chilly in the shady grove, they were game to smooch in the pelting waterfall.

We had just begun our hike to their ceremony location when we heard a voice call out from the canyon below. Thinking it was just a punk wanting to hear their voice echo, we paused but moved on. However, the voice soon came again. This time we were able to hear the words, “We are loooooost!” which stopped us dead in our tracks. We were able to visually locate 3 men who had gotten off trail and run out of water on a grueling hike up from the Gunnison river, 2,000 feet below. They were now SO close to the end of their hike, but they only spoke Spanish and couldn’t find a way up! With the help of another stranger, Luke, we were able to guide the guys back to the trail. We gave the men our extra water and Luke gave them snacks and helped them the rest of the way back to the ranger station. Talk about being in the right place at the right time! I know this is an experience NOBODY will forget!

Sure, we had a rough outline for the day. (The main goal of which was to have a good time.) We thought we’d summit nearby Green Mountain, but that didn’t happen because of the time we spent rescuing Jorge, Jim and Jose. But we did get to see a Desert Bighorn Sheep (Kacie’s first time.) They poured trail mix straight into each others mouths. They brought their marriage license in a paper towel tube and signed it on each other’s backs. The champagne popped before they were ready and Pete had to descend the canyon a short way to retrieve the wire topper. I got a cactus spine in my finger from removing a prickly pear from Kacie’s train. In fact, so much nature was collected in her dress that we joked that she had created a whole new biome. None of that could have been planned.

Elopement Dinner with a Private Chef

Because Kacie and Pete got married in such a remote area of Colorado, we didn’t have any good restaurant options for dinner. This happens more often than you think when you want beautiful scenery and sunset photos in the summer! Luckily, I’ve got a built-in plan. My partner is a private chef who offers intimate dinners – right out of our 5th wheel camper that we live in full time! He created a menu that included hot & fresh baked bread to start. The second course was a pearl pasta cucumber boat with caramelized scallions and a balsamic reduction. The boat shape was a nod to Kacie & Pete’s proposal which happened when they were on a canoe trip. Finally, a tomahawk ribeye and vegetarian kebab with globally sourced veggies capped off the night.

In between delicious courses of this meal made just for them, the couple enjoyed stargazing. We even spotted a few shooting stars overhead as they took in the dark skies and twinkling milky way. These camping elopement photos aren’t staged – it actually was this magical. And for dessert, they got to roast marshmallows and make sm’oreos over a campfire on their wedding night, which not enough people can say they did!

Start with my many location guides – or pick somewhere totally new to you! View my travel schedule to follow along and meet me anywhere for your very own camping elopement photos.