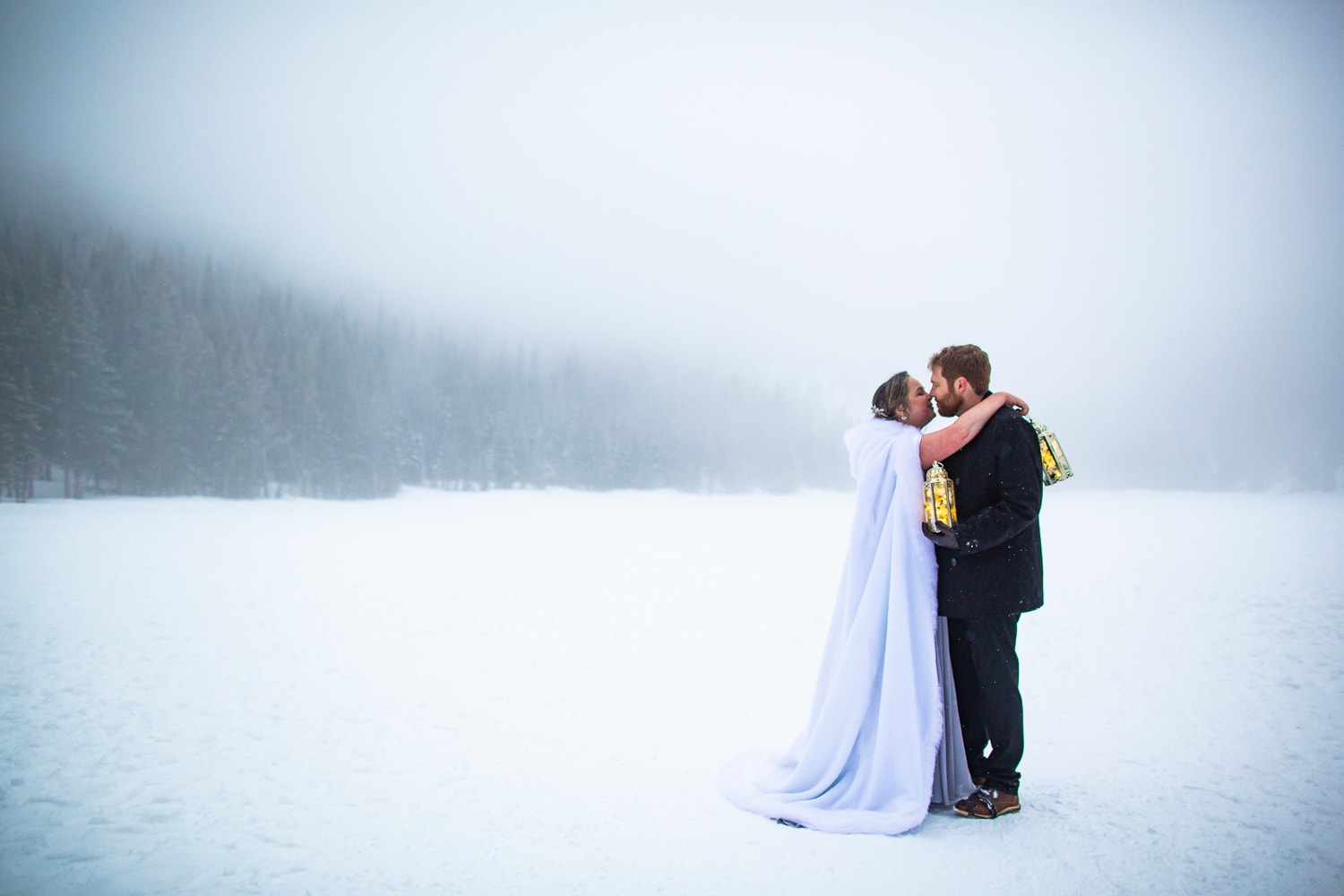 Buckle up National Park lovers! Rae and Erik’s Bear Lake elopement in Rocky Mountain National Park last month was incredible on all counts. I met Rae and Erik when they were bridesmaids’ and groomsmen respectively at Brit and Alex’s wedding back in 2016. As soon as they got engaged, Rae reached out to me and we began dreaming up the perfect elopement for just them. While we were hoping for mountain views, instead the frozen lake was layered with the most beautiful fog. It was the foggiest place I think I’ve ever been! The unique landscape might have put off some folks – but not these two. They embraced the crazy weather and set out to have the absolute BEST time marrying each other. Spoiler alert: they nailed it and even had no-holding-back snowball fight to cap off the night!

Erik kept a classic look with a bright blue tie to go with his suit. Rae wore a silver gown with long flowy sleeves and a white hooded cloak. It’s a good thing she didn’t wear all white, because she would have become a floating head in all the fog!! Instead, she was ice queen GOALS. (Also known as ‘hot mom viking bride’, according to Rae’s two kids.) They were their only “guests” and they matched in dusty blue and black tones. Their unique style came through in all their choices, which I LOVE! They picked white Calla lilies for their bouquets and glowing lanterns to accent the twilight.

They waited until they arrived at Bear Lake to see each other, and you have to see Erik’s reaction to believe it! Perhaps the most memorable part of the day closely followed: we walked across the frozen lake together to get to the other side. In the center, the dense fog completely closed in on us and we were surrounded, seemingly by cotton. The all white scene sparkled in our eyes. At the far shore, the emotional ceremony had me crying as well as they spoke from the heart, made nerdy references, and self-solemnized their marriage. As they embraced for their first kiss, Rae’s kids were so moved with emotion that they hugged too! If I wasn’t frozen solid, I would have melted!! Spontaneously, they each told Erik what his committed presence in their life meant to them. Ok, NOW errybody be crying!!

Thanks to Catherine for catching these silly and funny behind the scenes shots of me at the world’s foggiest elopement.